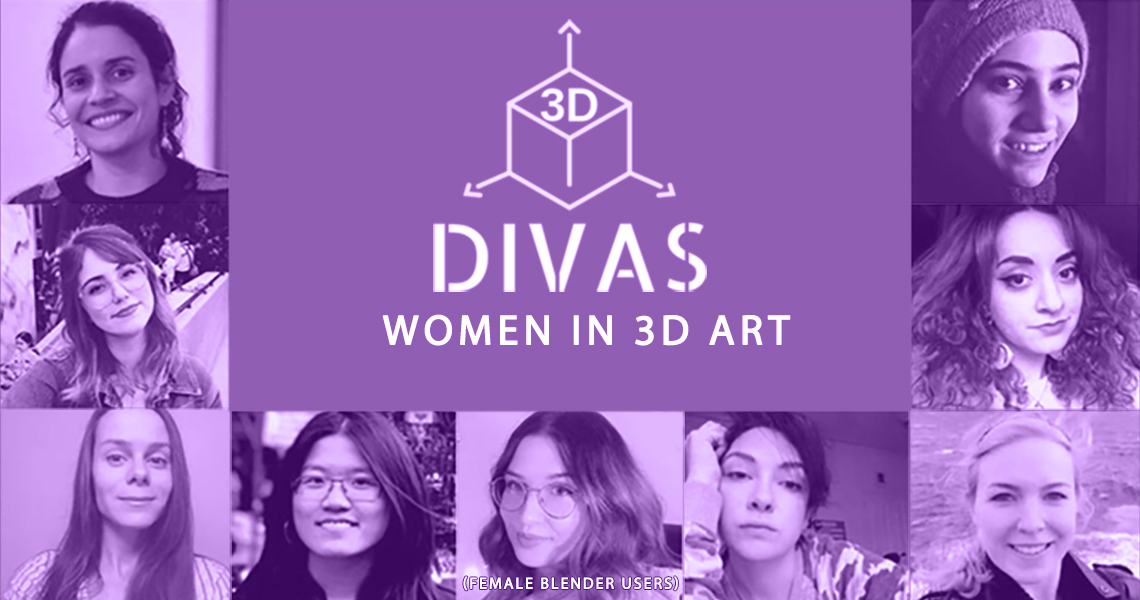 interview with the founder of 3D.Divas. A community to support and celebrate the amazing women in 3D

I was invited by the 3D Blendered Magazine to answer a few questions about the 3D.Divas, an Instagram account that I created in October 2020. My main goal with this project is to empower and put the spotlight on some of the many incredible female 3D Artists around the globe.

I am a female 3D Artist and I have worked in the film industry for many years now. As a woman, I had to deal with some situations in the workplace that for sure wouldn’t happen if I was a man. I’d rather not get into details but I know that, unfortunately, I am not alone. Other female artists have revealed to me their similar experiences. And in this industry, although we are a minority, some women feel threatened by other women and they start a silly rivalry. I truly dislike this behaviour as I believe that Women in 3D should support each other. And my motivation to start the account was to do exactly this.

WHO IS THE CREATOR?

I decided to remain anonymous because the idea is to promote other people’s work and not myself. Just a few people know who is “behind the screen”. However, if necessary, someday I may eventually reveal my identity. But for now, it feels good to be unidentified, invisibly “hugging” and lifting up other female artists.

HOW IS IT DONE?

Since I started this project, it’s been a joy to research and discover so many talented women in 3D. So far, over 100 3D.Divas have been featured. But I have to confess that it isn’t an easy job, as I need to dedicate a few hours preparing the posts for each week. And for each of the artists, I need to research their work, their nationality, their social media names and their pictures (I thought it would be important and also charming to show their faces and not only their work). It’s also very time consuming to organize all the images. I have a full time job so I use my lunch break to post. For the weekly lineup, I try my best to make it diverse, always choosing artists from different countries.

WHAT IS THE FEEDBACK?

I have received many direct messages from people sharing their support and also recommending other artists, which is great! But so far, out of the girls that were featured, I only received feedback from one of them. She told me that, after I shared her work, she got over 100 new followers. Many artists that she admires started following her and she was even contacted to do a freelance job. This positive feedback really motivated me even more to continue this project. It was a great achievement not only for her but also for me as my goal is to support other artists.

IS THERE A PARTICULAR FIELD IN 3D WHERE FEMALE 3D ARTISTS TEND TO BE MORE PRESENT?

Nowadays, women’s presence is in all 3D departments: Modeling, texturing, shading, grooming, lighting, comp, animation, rigging, FX, etc. Women are everywhere, even if they are a minority. But for me, it is much easier to showcase the work of 3D modelers because they normally use Instagram. This is more convenient for me to create posts using their still images. Every week I’ve been dedicating one day to feature a female 3D animator. It makes more sense to show their work in vídeo, but it’s a lot of work to capture and edit their animation. I would love to show the work of females in Lighting, comp, FX, Texture & Shading, layout, etc. However, as I mentioned, I have a full time job at the moment. So unfortunately I can’t dedicate more time to capture their Demo Reels and edit them. This will be a goal of mine in the future, but for now I am only able to keep featuring 3D modellers and animators.

DO YOU THINK THAT COMPANIES ARE NOT GIVING ENOUGH SPACE FOR WOMEN in 3D?

Fortunately, the studios today are really striving to be more inclusive and diverse. However, although this is great, some people believe that a woman or a person of colour gets hired just because the company is trying to hit diversity quotas. For this reason, some women in 3D are underestimated and need to constantly work harder to prove their worth and be respected. I had to deal with a situation like this when I worked as the lead of my team. Some of the other male leads were very sexist and always tried to intimidate me. Which wasn’t a pleasant experience.

When I started the project, I was sharing 7 artists every day and this lasted 12 Weeks. I thought that after a few months, I would run out of artists to showcase and then I would simply stop posting. But fortunately, that wasn’t the case. Every time I researched for female 3D artists, I’d be very surprised to find so many hidden talents. After taking a little break, I decided to post only 5 days a week and I am also dedicating one day to bring back one artist that was already featured so she can share with us a bit more about her work and herself. With the 3D.Divas, I hope to create a catalogue that can be used not only for other artists to get inspired but also for recruiters in the film and game industry to find these creative women and eventually offer them a job.

WHERE TO FIND AND SUPPORT THE 3D.DIVAS INITIATIVE?

The 3D.Divas is on Instagram (@3d.divas). It is a community where we can all support and celebrate the amazing women in 3D. There is also an online “tip Jar” (https://ko-fi.com/3ddivas) for anyone who wishes to donate and support the 3D.Divas project.

Thanks 3D Blendered team for giving us the space to talk about this project!

We thanks very much 3D.Divas for this inspiring and honest article and we hope that this will contribute to their activity. We decided to conclude this article listing some of the Female 3D Artists who use Blender that we discovered over these years. The list is far from to be exhaustive; forgive us. We are sure that we will add more names in the time to come (please, give us suggestions)

Links to (some) Women in 3D using Blender

Digitization of cultural heritage in Blender

Interview with Maria Grazia Di Giovannantonio. who studied architecture at the University, and then a master in Multimedia Interactive Heritage. She used Blender for the photogrammetric reconstruction of an archaeological site… Read more

Interview with Lina Jakaité. A geologist from Gargzdai in Lithuania, who loves also 3D geological modelling and all that is associated with it, maps, cross-sections, interpretations… Read more

Interview with an Italian 3D Artist

Doriana Pompili is an Italian 3D Artist, a 3D modeller animator freelance and co-founder plus Graphic Designer of the blog Mellow Animazione. She graduated from the Brera Art School, and she has a Bachelor in Communication Design at the Milan Polytechnic. Read more