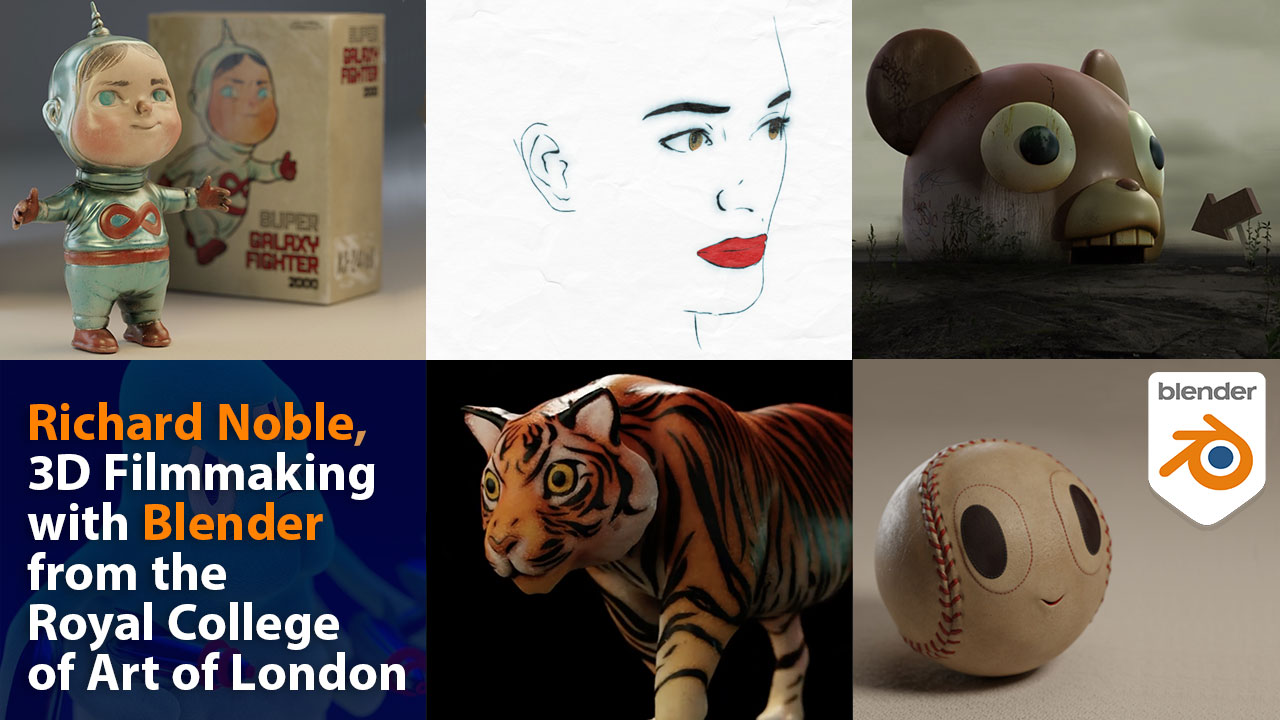 My name is Richard Noble. I am an Animation Director and CG generalist. I started out as a 2D artist (with a BA in Illustration) but after he specialised in 3D.

I graduated with an MA in Animation from the Royal College of Art in 2020, and before that received a BA in Illustration from the University of Brighton.

My work has been featured on Cartoon Brew, Short of the Week, It’s Nice That and Vimeo Staff Picks. I have worked on projects for clients such as Facebook, Live Nation, Nickelodeon, Audible and Capri-Sun.

You are an animation director. Tell us about your latest animation projects

I recently finished my 2D/3D animated film The Sam Story, which was my graduation project from the Royal College of Art. It’s a black comedy about free will and determinism, in which a man discovers an identical twin who seems to have been living an identical life. Since I finished that film, I’ve decided to focus on 3D work full-time, starting with a series of toy renders – plastic astronauts, plush rabbits, ceramic cats, glow-in-the-dark aliens, etc. This year I’m going to start building sets for these toy characters and making them move.

Why do you use Blender in your workflow?

The main reason I use Blender is that it does everything I need it to do, and it has an extremely active and enthusiastic community. I don’t claim that Blender is the best software in every possible department, but it has a fairly robust set of layout and animation tools, as well as a fantastic modelling toolkit and two excellent render engines. Increasingly, though, I am seeing Blender as just one part of my toolkit, and I do a lot of my work in ZBrush and the Substance suite.

My favourite thing about Blender is the highly customisable split-screen UI, which has always been powerful, but which has become vastly more intuitive in recent years – I now can’t imagine living without the Collection system, for instance. It’s also very freeing to have access to both a real-time render engine and a physically accurate path tracer, both of which are deeply integrated into the software and share the same materials and lights. I am also optimistic about the future of Blender, especially the long-awaited animation tools, the new asset browser and the Everything Nodes project. Blender has improved dramatically in the 5 or 6 years since I started using it, and it gets better every few months. I’m not married to Blender – I’d switch over to another program if it made sense to do so – but it’s a great time to be a Blender artist.

Where do you get the inspiration for your character style?

I try to look for sources of inspiration outside of CG art. I especially like Daniel Clowes, Wilfrid Wood, Alberto Mielgo and Dave McKean. I also like looking at strange vintage toys on Pinterest, or other artefacts from the past.

What’s next? What is your dream project?

Though I studied animation at the RCA, I don’t think of character animation as my strong suit, but rather filmmaking, storytelling and visual design, particularly using 3D tools.

I have a number of small-scale personal projects I’m working on, mostly very short animated loops and character models. From there I’d really like to find some interesting commercial projects that use stylised 3D or a 3D/2D hybrid, perhaps even using AI software like EbSynth to do a kind of automated rotoscope process.

Going forward I want to sharpen my character modelling and texturing skills as much as possible. I have a traditional art background, so I am very drawn towards digital sculpting and texture painting since these are the parts of the 3D process that feel most familiar to me. Digital sculpting and texture painting is just a 21st-century version of drawing, where the lighting and the perspective is all handled by the computer rather than the brain of the artist. It’s kind of like a symbiosis between the intuition of the artist and the immense calculating power of the computer.