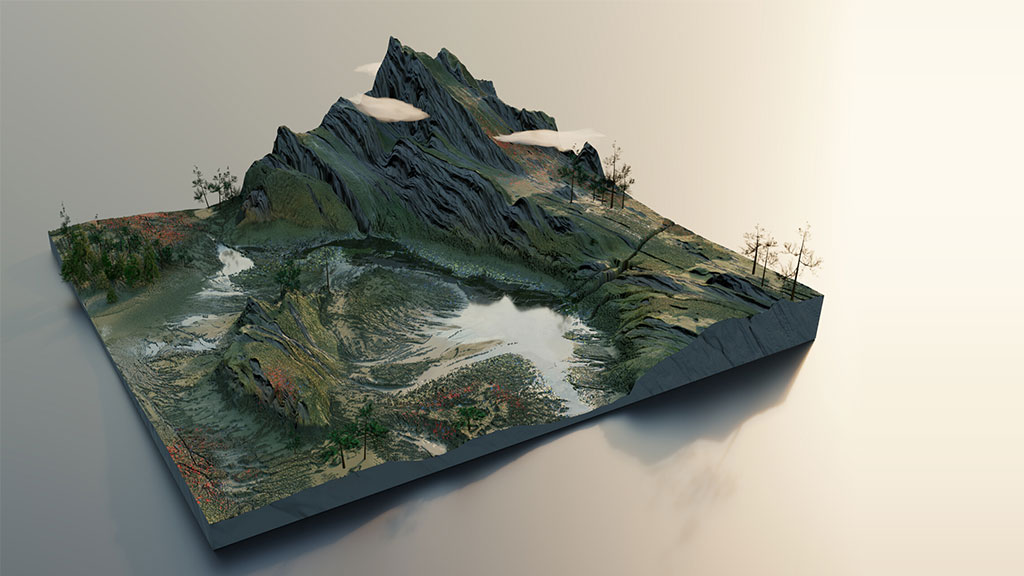 Today we interview Lina Jakaité. A geologist from Gargzdai in Lithuania,  who loves also 3D geological modelling and all that is associated with it, maps, cross-sections, interpretations…!
During her geology studies she was more of a carbonate rocks person, then she spent a few years working in quaternary geology (whatever this means). Now she works as a petroleum geologist.
But one of her after-work hobbies have been always drawing, paper first, digital art later.
When Lina combines her geological and artist sides, she achieves interesting results; creating amazing 3D models.
We got to know Lina for her beautiful minerals and landscapes procedural textures on Instagram. Let discover something more about Geology in Blender 3D with Lina.

Strike-dip is one of the very basic terms in geology. It tells how the rock layer is positioned in space, strike tells the azimuth of the layer and the dip tells how much that layer is inclined. I chose this term to use as my website name just for fun, not much reasoning behind that, just knew that those two words are a lot easier to remember than my Lithuanian name.

How did you learn Blender? At the University, via free tutorials or paid courses?

At the very beginning I thought to start from Youtube tutorial videos, then realised that I need something else. I could not learn a lot just repeating tutorials step by step. Because a little step aside from what is shown on tutorial and I did not know what to do. So, I searched for online courses for very beginners. Started ‘Complete Blender Creator: Learn 3D modelling for Beginners’ course on Udemy. I would totally recommend it to anybody who is new in Blender.

After that course, I started my own projects, and every time I have a question, I just google or look on youtube for solutions. In most cases, I find all the answers since the Blender community is so big and there is a lot of sharing.

It’s difficult to exclude some tool or feature as the most preferred but I would say the most important feature in Blender for me is its shading, texturing possibilities and tools. Everything that can add ‘realistic’ look to my geo-objects, whether it is a rock, mineral or mountain.

The thing I like the most in Blender is probably the fact that it is so ‘all in one’. It is not a ‘group of sister-programs’ or some kind of modules where you have to jump each between for different tasks. I can do anything I want whenever I want with the object or property I created.

Do you use other software, such as Zbrush or Substance Painter, instead to have the entire workflow inside Blender?

I do use Substance Designer and Painter quite often, also World Machine or Gaea. Also, since some of my projects need to include real-world GIS data I use a few geology-related software.

How much do you use Blender for your work?

Probably for most of the projects. Even with those projects where the great part is done in another software, I use Blender for the final scene and final rendering.

Are you freelance or do you work for a company?

Most of the visualizations are for me interesting to do. I realize that when I’m sitting in front of my computer for a few hours without getting up just because it is so interesting to do. All visualizations are different and interesting because I create nice looking picture while maintaining real-world data in it. And often I do not necessarily know what the result will look like and creating visualization is like solving the puzzle. For example, a recent project I’ve done was a few illustrations of the gold deposition environments in the Witwatersrand area, South Africa. The thing is that I am not a specialist in this particular geology field. I got the facts from professionals, like ‘rock1 is this, rock2 is this, these layers are that thick, there should be rivers, should be the ocean, etc.’ And the result was greenish environments, which I did not expect at the very beginning, but it is true because the common rock in that area was a greenish looking rock – greenstone.

We have been fascinated by this illustration. Tell us something more about it

It is one of the very first geological illustrations I’ve done. I was thinking about this type of illustrations for quite a long time but created it just after I’ve learned Blender (none of geo-software I know can create realistic looking things). In geology, mineralogy there are a lot of theoretical things, like mineral classifications and mineral naming based on their chemical compositions. Some minerals are like families, they are almost the same but slightly differ from each other. This exact illustration shows the garnet family and its end-members (intermediate variations are also possible). It shows the chemical formula of each member. You can notice that their chemical formulas are almost identical, just one element differs between two neighbours.  Each member with its chemical formula has a different name. It is very likely that the garnet with certain chemical formula and name will have the shown colour, i.e. pyrope garnet will be red, spessartine will have orange hue, uvarovite will be green, etc. Usually, you would find the same theory explained in written form and with black lines scheme explaining chemical differences and changes. What I did – just added mineral shape and colour onto those theoretical schemes. So, looking at this illustration, looking at chemical formula and name you know how that mineral actually looks like. Or if you have a garnet, you can guess which garnet specifically it is based on its colour (though you need chemical analysis to confirm that).

Not really. There are a lot of good artists and good works.

What will be your job in 5 years time?

This journey with Lina in the fascinating world of Geology in Blender 3D is over for the moment. We wish all the best to our 3D artist and we hope to meet soon again with her with new insides of the 3D applications to the geological world.