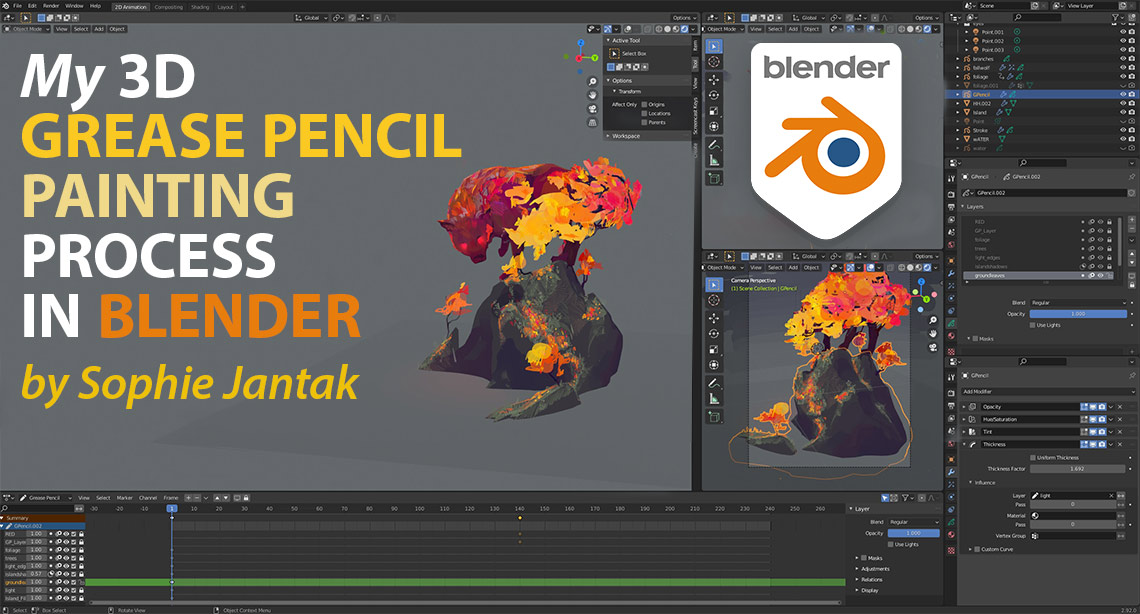 Hello! I’m Sophie Jantak, and I’m an illustrator. I first started using Blender to create 3D scenes that I could use as reference for my 2D drawings, never intending to make any “final” works with it. But then I started using grease pencil and I never left.

Today I’ll be breaking down the process of my newest 3D grease pencil illustration:

I have a long history of Red Riding Hood retellings – they’re all different, but for some reason they always involve a giant tree wolf.

I made this illustration at the start of 2019:

I’m still very proud of it, but since then I’ve studied animal anatomy a lot more closely and… well, let’s just say I can see how much I didn’t know at the time. So in addition to recreating this piece in 3D with grease pencil, I also used dozens of reference images to try to get a more realistic tree wolf.

My sculpting process is constantly changing, but for this piece all the meshes started as spheres and I sculpted using dynamic topology. I used the snakehook tool and would hold shift to occasionally smooth out areas.

I focus on big shapes, as detail will be drawn on top with grease pencil. In fact, looking back, I added too much detail to the fur of the neck.

I always add extra views of my scene – the top right window is looking through a second camera with a scale value of -1 on the X axis, so that I could keep in mind how my piece looks mirrored – flipping your canvas is a helpful trick for drawing and I wanted to use that here!

The bottom right window is looking through my main camera, and this is the view at the start of the illustration. My vision was for the scene to start at an angle that would trick the viewer into thinking these were just trees on a hill, and then it would turn and reveal that it’s a wolf with a tree tail. And so I kept this goal in mind as I sculpted, wanting the legs at that angle to read as three tree trunks.

I’ve had this idea for a while of making foliage from deformed spheres and grease pencil.

I use the grease pencil to draw the edges of the leaf masses and then I convert these strokes into paths, and use the knife project tool to cut these areas out of the meshes. It’s an interesting look!

I also recently discovered that, in solid view mode, you can give all your meshes a flat shader, and this ended up being incredibly helpful to see how the outlines of everything looked together. I was able to make sure that this 3D piece read well, even as a 2D piece from any angle.

Happy with the meshes, it was time to convert them to grease pencil. I gave them a solidify modifier and a decimate modifier (to reduce the face count as much as possible!)

Then I converted them to grease pencil objects, while also checking the option that says “keep original”. The wolf, foliage, mountain and water are their own grease pencil objects. I deleted the stroke layer that got created, and gave the fill material a colour that would be the base colour of each section of the piece.

I also had a vision of giving the wolf glowing red eyes, and so I quickly placed two point lights in the eye sockets and made them vibrant red. Having active point lights in the scene really slows my files down, so I created a new collection for them. Now I can make this collection visible when I want to see how the piece will look with them, but I keep it hidden for the majority of them time I’m working with grease pencil.

GREASE PENCIL: Draw on the meshes

Something I wanted to try with this piece was to emulate how light would actually fall on the scene. So I added a light and set the type to “Sun”. I made it that purple colour just to help me see the shapes of light. I won’t keep this light in the final render, but use it as a guide for when I’m adding textures with grease pencil strokes.

The reason that I keep my original meshes is so that I can draw on top of them with grease pencil, with the stroke placement set to “surface.” For some of the areas, like the wolf and the island, I keep the meshes even in the final piece, so that they hide the strokes on the other side. But for the foliage I hid it, because I thought the chaos of it gave a really unique and interesting look.

At this point I realised I didn’t like the composition of the piece, particularly how the island is shaped. I was following a course on Realism and after a lesson in which we talked about composition and how you can lead the eye around a piece, I knew (with a heavy heart) I needed to scrap the island I’d sculpted and drawn.

Here is my new version after really considering composition. I still have lots of study to do on the topic, but I think there’s a big difference already, just from giving SOME thought to composition instead of sculpting and drawing strokes with no thought to it at all.

It was painful to admit that I had dived in too quickly and needed to redo so many hours of work, but every day I practice being more mindful in my work, not going on “autopilot”, and I’m proud that I took the time to start over.

And our little red riding hood was also drawn with the stroke placement at “3D cursor”, so I placed the 3D cursor at the top of the hill and drew her pleading with the wolf.

Although I’m not an animator, I still enjoy adding animated elements to my scene using Blender’s 3D animation tools and grease pencil modifiers.

I encourage you to watch the video to see all the animations, but with the Build Modifier I have the text and the leaves on the ground get “drawn in”, and the leaves of the wolf’s tail disappear. I used keyframe animation to move and rotate the leaves so that they’d swirl around the scene.

A blur effect on the grease pencil object helps to sell this effect, and this is keyframed so that it becomes more intense in the middle of the swirl as the leaves move fastest.

I also keyframed the rotation and location of the camera so that we rotate around the scene.

A noise modifier makes all the strokes dance a little bit, to add a bit of movement to even the static areas. And our red riding hood strategically disappears from the bottom and appears at the top just as blowing leaves cover each spot, so that I have her climb the mountain without having actually animated it.

Thank you for reading and thank you to the 3D Blendered team for reaching out to me to share my process. I enjoyed putting this together, and I hope it was helpful.

I tried to break everything down by process, by I also made a video where I broke things down by time, going through every version of this Blend file I saved. It’s a different look at the creative process, and if you’re curious to get a different perspective you can watch it here:

Other works by Sophie that we love: