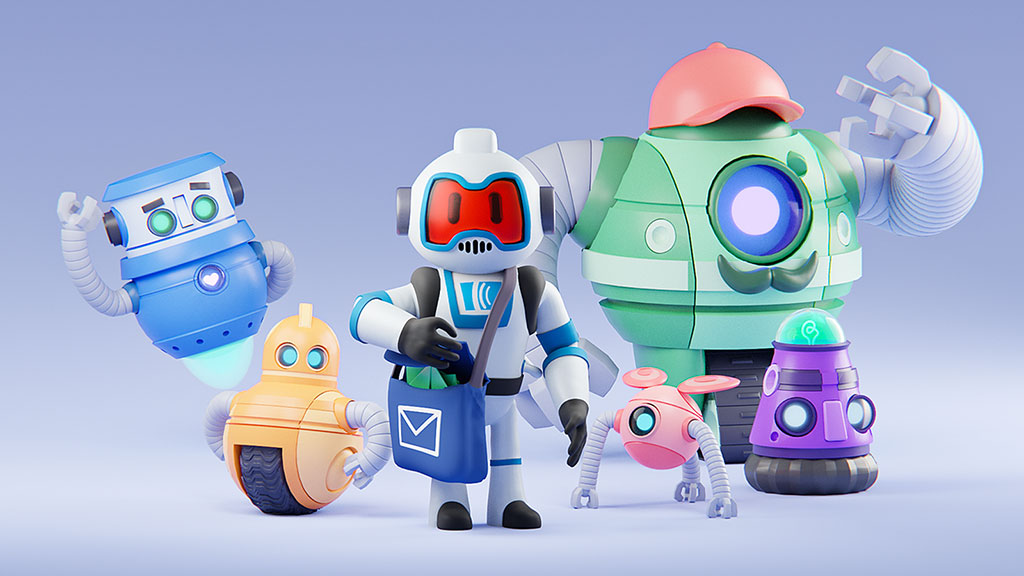 Many Blender artists come from different backgrounds, and some of them have different type of jobs simultaneously. Rob Heath is a Senior Brand Designer with AWeber. He lives in Perkasie, PA, US. He is specialized in UI/UX design, prototyping, motion design and… (obviously) 3D graphics.

He got his start in design in 2005, working full-time as a pre-press operator and graphic designer for a small print shop in Tarpon Springs, Florida. After then Rob worked as Print & Media Designer, Front-end Developer, Web Designer, and now is a Senior Designer.

In the last 2 years, Rob fell in love with 3D using Blender 3D.

Haha, well initially because it is free. I needed a piece of software that allowed me to learn 3D modeling and rendering. With Blender being free and the online resources for learning abundant, it was an easy choice. Now I love using it and have a hard time imagining jumping to another alternative such as C4D, Maya, or 3DS Max.

A little over 2 and a half years now. I am not someone who is big on making New Year’s resolutions, but my 2018 one was to finally commit to learning 3D and I really wanted to stick with that resolution.

The first year was very exploratory. I’d learn when I could find time. I’d try to learn by doing character illustrations and often hit a wall in not understanding how to achieve my end goal.

The second year I started to find my groove with Blender and I was able to use it with work a little. The past half year it’s become an essential tool in my utility belt and I use it both professionally and as a hobbyist.

How did you learn Blender? Via free tutorials or paid courses?

I initially got started with CG Cookie. That was critical for learning how to navigate Blender and understand what I can do within it.

The learning curve is pretty steep, so the issue wasn’t just learning how to use Blender, but also retaining that information for specific scenarios, so I created a Notion doc where I’d describe problems / things I didn’t know how to do exactly in Blender and what CG Cookie video or Youtube tutorial I found that helped me solve it.

The Dynamesh sculpting is one of my favourites. I am aware Zbrush is the king of digital sculpting but I think Blender doesn’t get enough credit in this area. The most recent Blender updates are knocking it out of the park with the sculpting feature add-ons. It gets me excited. Even though Blender is over 20 years old, it makes me feel like I am getting in with the software and community during its renaissance.

Photography and lighting is also pretty fun and easy to get lost in. I’d play with lighting and camera setups for hours and sometimes forget I have a project to finish because I get so lost in playing digital photographer.

This is kind of a tough question because Blender does so much. I’d say besides being a robust piece of software, its community is one of the strongest points. There are so many Blender resource sites and social media profiles dedicated to helping you learn Blender. And because Blender is free I think a lot of people in these communities kind of approach interacting with each other in a friendlier, less elitist way. That is my take coming from the design community where things are a bit different and a little more toxic sometimes.

What would you like to be improved in Blender

Asset management. Coming from a world of design systems and development where I’d say a quarter of your job is eliminating redundancies, it was very off-putting to see how Blender manages things like Materials. It’s all stacked and the only organization you have is A-Z naming conventions. While you can use Nodes to create groups and such, it still feels very easy to get lost in the node mazes.

I think Nodes are cool but it forces users to learn a skill set I think could be eliminated with a visual editor. Nodes feel like visual programming to me and that’s cool if you want to do that but I think there should be options in Blender to just approach it strictly visually.

Also retopology tools. I use a 3rd party plugin right now and it gets the job done but I think a lot could be done in this space to help automate and speed up the retopology process.

Have you ever used any other 3D software?

I am starting to dive into Zbrush and Keyshot a little. I think Blender will continue to grow and become more of an industry standard but I recognize Zbrush is a great tool in its own respect and learning it to use with Blender would be beneficial.

Do you use any other software in your 3D workflow, such as Zbrush or Substance Painter?

I use Forger on my iPad for basic modelling. It’s a great app for blocking out sculpts or doing some high fidelity modelling. I use it when I am on the go to start projects and port the assets over to Blender. I really want to learn substance, but it’s a financial investment and I am looking at other alternatives that are in development like Armor paint (https://armorpaint.org) or 3rd party addons like Layer Paint which just got released on Blender Market.

How much do you use Blender in your job?

I use it on a weekly basis. I just led the redesign of the website for the company I work for, AWeber. I levered Blender to help create a cast of 3D characters along with bringing AWeber’s mascot, AJ, into 3D. The characters are called The Automations, and along with AJ they appear across the site and platform as 3d illustrations which help bring some playfulness and authority to the brand.

I also used Blender to create 3d illustrations for presentations and brand iconography for the website.

We see that you do many different jobs. Are you freelance or do you work for a company?

I do sort of wear a few different design hats at work, which I like doing, but it’s all for one company right now. I work as the brand designer at AWeber, which was one of the first email marketing SaaS companies and also invented the autoresponder.

I am open to doing freelance 3D work though. It’s not something I do a lot of now because my wife and I just bought a house this past year and now we are expecting our first baby in June so I am taking the free time I have and making the most of it with my wife and our home before the baby comes. In the future I’d definitely like to start taking on more freelance work and turn that into a full-on side hustle.

On the side, I collaborated with one of my favourite music artist, Mega Ran, to work on the cover art for his music single, Wily’s Revenge. It also happens to be one of my favorite pieces as of late. It was just fun to take a popular IP and make a unique piece of 3D art based on it for another artist I respect.

But the coolest thing I’ve enjoyed working on was making the cast of 3d robots, the Automations, for AWeber. I designed each one in Blender and really took an inspired approach to their creation. Just creating primitive shapes in Blender and trying to explore where each of those shapes could go with some hard surface modelling.

The majority of your 3D works have a cartoonish style, why?

Haha, well I’ll be honest because it’s easier for me to produce art in that style within a reasonable time frame. Don’t get me wrong, I am not saying it’s easy, it’s just easier than trying to create photorealistic imagery. I am trying to push myself beyond that, but there are only so many hours in the day and a part of learning is setting reasonable, time effective, goals for myself. Doing cartoon-ish style work allows me to work within those goal constraints, and as I get better I will be able to push myself beyond that. So stay tuned!

Hmmm, well I have a bunch of 3d artist who inspire me. There are a  few who use Blender. Some great artists who use Blender that come to mind are Giulia Marchetti, João S Junior, Brandon Lyon. Can I drop a few names outside of that? While there are a many Blender artist that do amazing work, it’s my belief you shouldn’t limit yourself to following other based on the software they use. It’s important to see what other artist are making outside of Blender because their principles are not software based.

Some artist whose work I find truly inspiring
Victor Hugo, Tiago Rios, Yosuke Ishikawa, Guzz Soares, and one of my absolute favorites, Raf Grassetti. Raf puts out work on what seems like a daily basis and it’s always killer.

You have worked as Senior Designer, Web Designer, Front-end Developer, Prepress, Print & Media Designer.
Wow! What’s your dream job and what do you see in your future?

Yea, I started working in the marketing design world, mainly web, since before I graduated high school. So I’ve cut my teeth doing a lot of different jobs and poked my nose down different paths to see what was right for me. I am confident now that what I do as a brand designer is the kind of work I love doing, but I do dream about getting to do more 3d work and seeing where that goes. I have a lot of good things going on in my life now so I am not taking any of it for granted, and that’s what excites me. It just gets better from here.